[Okay, so I really spent about $18, but with a little more time, I could have done it for around $3.50 if I had stuck to the buses and walking.]

On our trip back from the UK last September, we had a 9 hour layover in Dubai. When we originally booked the ticket, some of my Kenyan colleagues had hoped to spend the day visiting Dubai; otherwise, we could have cut the layover in half. I’m always up for a little exploration, so I thought it would be nice to get a feel for the city – especially the waterfront and the tall buildings that supposedly make it so famous. I’d already seen the artificial, palm-shaped shoreline from the air, and I didn’t really want to see any of the famous shopping malls. I also didn’t want to spend any money.

Since we still thought some of my Kenyan friends could get a cheap visa but weren’t sure, we all got off at the first – transit – stop instead of going directly to arrivals. Unfortunately, we never could get a straight answer about how much a visa would cost them – one agent said $70 – so they wound up staying in the airport. Since I hold a passport from one of thirty-three countries which don’t require a visa for the UAE – more American privilege – I decided to venture out on my own little adventure. After a nice, FREE (for long transfer in-transit passengers) breakfast buffet, I left my heavy computer bag with Richard and went back through the transit security (the wrong way) with only my camera.

After the crowded bustling transit terminal, I was almost stunned at how sleepy the arrivals area was. Later, I realized that it was Eid al Fitr – the Muslim holiday for the end of Ramadan.

Once the light rail line is completed, the trip into Dubai will be easy. In the meantime, here’s what I did. My recommendations are starred:

[Commercial Break:] In the ticket booth, I ran into my first snag – a very hospitable attendant. After I explained what I was doing, he made me come into his office and sit down for a cup of tea.  Although I was initially trying to cover as much ground as I could in a few hours, I figured . . . why not . . . meeting real people is probably more important than tall buildings. So I sat and listened to his story: Palestinian refugee in Iraq (Palestinian refugees are “treated as scum of the earth’s scum by everyone” – his words). . . Got a job as an interpreter for the US Army – a “terp” (read about their trials in this Washington Post article). One of his regular informants fell in love with him and threatened to kill herself if she didn’t marry him (he’s an older guy). He liked her too, and they had a happy marriage for a couple of years – nice baby. Then her family started trying to extort money and threatens to expose him to “bad guys” unless he agrees to a divorce. (Other weird things too.) Though he still loves the woman, he is forced him into a divorce to save his own honor. [I haven’t done justice to his story, but it’s crazy and sad any way you look at it.]

Here I also learned that Dubai’s main languages are Urdu (Pakistani), English, and Arabic (maybe in that order) – only Arabic and English are official.

[back to our regular programming:]

[pictures below] – 2 major impressions: 1.) Most of the people I saw appeared to be from other places all around the world (notably Pakistan, India – they have their own passport lines at the airport. – 90% see article below pictures 2.) Construction everywhere – especially construction with a fetish for height. 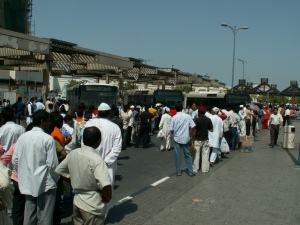 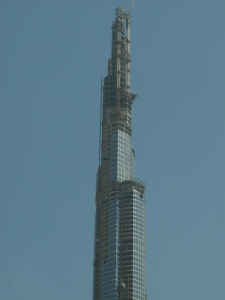 construction at the top 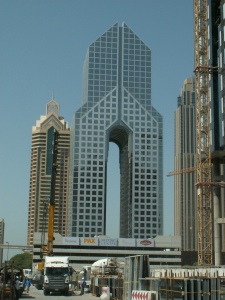 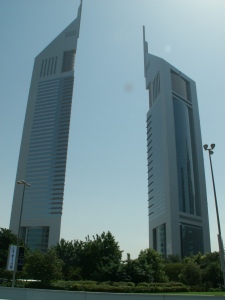 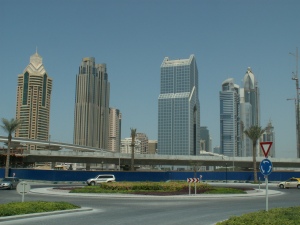 From The Daily Nation:

An unknown number of Kenyan workers in Dubai could be headed home as the global economic crunch takes its toll on the Persian Gulf city. And, like many other foreign workers who make up 90 per cent of Dubai’s population, the Kenyans are victims of ongoing layoffs.

With economic growth estimated to dip to less than 3 per cent this year, down from 8 per cent last year, Dubai firms – and largely the United Arab Emirates – are drastically cutting down on staff.

A report by banking giant HSBC has indicated that almost $75 billion (Sh5,250 billion) worth of property projects have been put on hold in Dubai. In its report, HSBC lists 59 projects under review, including eight that have been cancelled. High-cost residential and commercial developments are most at risk.

A large number of Kenyans in Dubai work in the construction and infrastructure, hotel and entertainment and transport industries. Many more are employed as domestic workers. Another portion of the population is involved in business , going to buys goods which they later sell back home in Kenya.

Hotels have also been affected, with revenue said to have fallen by a quarter in December, reflecting the fall in the number of visitors following the global downturn. In 2007, the government of Dubai said it wanted to grow at 11 per cent to 2011.

With Dubai’s economy in free fall, newspapers have reported that more than 3,000 cars lie abandoned in the parking lot at the Dubai Airport, left by fleeing, debt-ridden foreigners — who risk imprisonment if they failed to pay their bills.

Some have left behind credit cards inside the cars, with notes of apology taped to the wind shield. Jobless people in Dubai lose their work visas and must leave within a month.