Over at Conn-versation, the Foolish Sage quotes Sparks on four discomforts conservative evangelical scholars have with critical scholarship.

. . . many evangelical scholars, in their more candid moments, will privately confess that their views are far closer to the critical consensus than their institutions could stomach.” 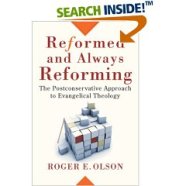 .
8. Tendency to think their theology is uninfluenced by history and culture. They look for the transcultural and see it as permanent.
9. Tendency to remain close to the fundamentalist roots. Many, Olson argues, are moving toward fundamentalism. He says, “I admit this is a matter of opinion.” I agree with that opinion.
10. Tendency to do theology in the grip of the fear of liberal theology.

He knows there are varieties and nuances; these are ten tendencies.

Next post by McKnight: the five features in common between conservatives and postconservatives. Follow the series on Jesus Creed.

One thought on “Evangelicals and Scholarship (Sparks and Olson)”