[Written by Christi] This past weekend, the grandparents took all the kids for two whole days. Wow!!! For the first time since . . . at least before kids, we suddenly felt carefree and open to total spontaneity. So we borrowed a tent from a friend and drove three and a half hours down to the Amboseli game park at the foot of Kilimanjaro on the border of Tanzania. Ben has always wanted to go, but we have been dissuaded by the $200+ a night lodge prices. Recently, we discovered that there is a public campsite for only about $13/night.

When we arrived, we nestled the tent under an acacia tree housing several cute vervet monkeys, and left about 10 feet of grassy area between the tent and the surrounding bush. Then we went for a lovely game drive. At sunset, Kilimanjaro, which had been shrouded in clouds all day, peaked its tip out at us and we saw herds of elephants peacefully grazing around the swampy areas.

At 7pm, we went back to the campsite and had a lovely fire under our spreading acacia tree. We saw the brightly shining half-moon and Orion the hunter through the silhouetted branches above. Then we snuggled down in our warm sleeping bags to enjoy the last of the varied bird calls as we drifted off for a peaceful night’s rest.

But at 11:30, we both woke up with a start!! In the pitch darkness, we felt something brush against the tent and heard a deep, breathy growling noise. I tried to shoo it away from the tent, thinking it might be some kind of fox or other small animal that had come along the animal trail in the bush next to the tent. Then it started to dawn on me that the animal sounds were of something much bigger–a hyena?

Ben woke up and we heard tearing and ripping noises of grass and branches being torn apart next to us. He quietly unzipped the window in the roof of the tent and we peered out.

My heart started thumping hard in my chest as I found myself face to face with a much larger face than my own. A huge, dark elephant with large, curved white tusks was towering above us. My first thought was to quickly find the car keys, un-zip the tent and make a dash for it. My second thought was, “I think I’m going to faint!” I started feeling dizzy and sick and put my face down on the bottom of the tent. 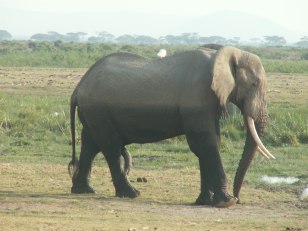 Ben and I motioned to each other to be very quiet. After the longest several minutes of our lives, listening to loud grunts, breaths, more tearing sounds and the occasional heavy footstep, Ben whispered “I wish it would just go away!” I said, “Yeah–that’s an understatement!” Sure enough, it walked around to the front of our tent, where we got a good view of some heavy, padded feet and the tips of white tusks. We would have loved to have a picture, but . . . Finally the elephant wandered off to another part of the camp.

Ben found the keys and I ran to take some deep breaths in the car, while Ben followed some voices to find what he thought would be Maasai warriors guarding the campground. What he found instead was a bar. “Now about this elephant?! . . . ” The guy who had shown us our site earlier staggered out to take a look at the elephant and drunkenly told us, “Oh, I forgot to mention that we have an elephant who likes to graze in that area at night. Just stay in your tent and have a good sleep. He won’t hurt you.” Nevertheless, we moved our tent AWAY from the animal trail in the bush out into an open NON-grassy area on the other side of our acacia tree.

We lay down to sleep again. A couple of hours later, the same noises returned–thump, rip, breath, growl, blow, snort…but this time not so close to our tent (though much closer to where our tent used to be). The elephant grazed some more and then decided to lie down and snore on the other side of the bushes. It sounded like he was only 20 feet away, but in the morning we found his “bed” about 50 feet away.

At 5 a.m., our dozing was again interrupted–this time by the screaming of the family of vervet monkeys living in the branches of our acacia tree. Again, we heard breathing and growling just near my side of the tent–but not like the elephant noises. I tried to see out the window on the top of the tent, but couldn’t see anything, the moon was gone and it was pitch black. The monkeys kept screaming and decided to let loose on the tent with pee, poop and a volley of tree branches. Soon the noise stopped.

At 7, we went to the “restaurant” – a hut with a fire in front of it and a bucket of soapy water for washing dishes. The park warden asked us, “Were those the monkeys in YOUR tree screaming at 5 this morning?” “Hmmm, that means there must have been a leopard or a python in your camp. Those are the only things that make monkeys scream because the other animals either don’t harm them or can’t climb trees.”

With that comforting thought, we went on our last game drive–saw lots of beautiful elephants at a safe distance away, and 10 lions walking away from a water hole to make way for several water buffalo.

The Rough Guide to Kenya complains that this camp site is not quite the same since they fenced the wildlife out of it.

For ages, marauding elephants of Amboseli have given farmers [AND CAMPERS – my own addition] sleepless nights and scientists have been testing ways of reducing the level of elephant crop damage and the threat to human life in the area. The human wildlife conflict that has persisted for years in Amboseli has left farmers reeling in losses of crops and even lives.

The ecosystem in Amboseli National Park and its small size does not allow for complete fencing off to hold the jumbos inside the park making the already precarious situation complicated.

This allows the elephants to move in and out of the 392 Km2 park and into human settlements, causing a lot of destruction in their wake. Amboseli, Maasai name for place of dust, portrays the delicate nature of the park which is almost dry save for three swamps that are fed by springs from Mt Kilimanjaro. These three swamps are the lifeline of the Amboseli and attract a host of wildlife to the park.

The Amboseli ecosystem hosts 1,500 elephants, which are famed as the most studied in the world. Researchers have been able to distinguish and name each of these elephants due to their extensive research. Other animals found at the park include thousands of wildebeest, buffalo, zebras and a host of other smaller animals.

Surprisingly, the large numbers of wildlife do not stay inside the park but only go to the swamps to drink water during early morning and evening hours and then head out of the park to the surrounding ranches where they feed and spend most nights. This is when they enter human settlements and destroy maize crops, which are their favourites. In the process they also destroy homes and leave people out in the cold.

. . . Among the deterrents that researchers have come up with to keep away elephants from human settlement areas include oil-chilli–tobacco ropes, fireworks, air pressure horns, and early warning systems such as trip wires and observation towers.